The Monk and the Methodist

“A monk and a Methodist walked into a bar on Halloween…”

It sounds like the opening line of a bad joke. But stick with me; there’s something behind that corny set up line.  Here goes…

The monk is Thomas Merton. The Methodist is John Wesley . At first glance, they appear to have little in common. They lived on opposite sides of the Atlantic Ocean in radically different cultures and centuries. Wesley was a loyal subject of King George III who opposed the American Revolution. Merton was born in France to a New Zealand-born father and American-born mother and came to the U.S. a year later.

Wesley (1703 – 1791) was a life-long Anglican who had some disparaging things to say about Roman Catholicism. Merton (1915-1968) was an agnostic university student when he found his way to faith in the Roman Catholic Church and ended up becoming a monk in the Abbey of Gethsemani in Kentucky.  (His autobiography The Seven Storey Mountain is a spiritual classic.)

With all their differences, I recently rediscovered a spiritual vision they held in common. The key word is “perfection.”

On the Way to Perfection

Wesley called his understanding of “Christian perfection” the “grand depositum which God has lodged with the people called Methodists; and for the sake of propagating this chiefly he appeared to have raised us up.” (Letter to Robert Brackenbury, 1790)  He meant “perfection” not as flawless obedience to a rule or law, but in the sense of “complete” or “whole.”

Christian perfection is the life-long process by which we are shaped into the likeness of Christ, becoming people who really do love God and really do love others (Romans 8:1-17). It’s the grace of the God who loves us enough to meet us where we are but loves us too much to leave us there. Wesley wrote:

“Entire sanctification, or Christian perfection, is neither more nor less than pure love; love expelling sin, and governing both the heart and life of a child of God. The Refiner’s fire purges out all that is contrary to love.” (Letter to Mr. Walter Churchey, 1771)

In a cosmic sense, “perfection” is the telos or “end point” or shalom of wholeness, justice and peace toward which God’s saving work in this creation is moving.  (Romans 8:18-25).  It’s at the heart of the Methodist tradition both in terms of our personal discipleship and our participation in God’s transformation of the world.

I’ll confess some Protestant/Methodist-biased surprise when I found Merton writing on the same theme.  He said the goal or purpose of spiritual discipline is “pure and simply love, that love which…draws and absorbs every other activity of the soul into itself.” (The Inner Experience, p. 88)

Merton described “perfection in love” as “perfect union with [God] in order that our minds and wills…may act in perfect harmony and coordination with Him as free instruments of His love and mercy.” (p. 101)

This could be the Monk channeling the Methodist or it could be both of them challenging the Spirit of Christ!

So, what’s all this theologizing have to do with Halloween?  Actually, nothing in terms of what happens on Thursday evening, but everything with what happens the next day.

Halloween, (“All Hallowed Evening”) was historically the dark night when “goulies and ghosties and long-leggedy beasties/And things that go bump in the night” had their last fling before All Saints’ Day when the Church celebrated the victory of the saints over every power of suffering, sin and death. That’s largely how it was until the 20th Century when All Saints’ Day began to fade and Halloween began to grow.  It took off in the ’50’s and began to soar after the turn of the Century so that now, more money is spent on Halloween than on any holiday other than Christmas.

I’m not ditsing Halloween!  I’ll have fun walking the neighborhood with my grandchildren on Thursday evening.  But here’s the way it connects with the Monk and the Methodist. 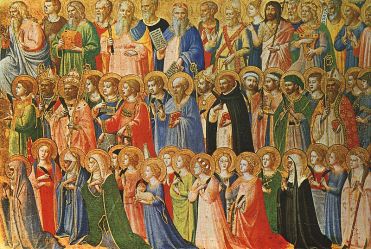 If both Wesley and Merton got the gospel right, and if “Christian perfection” is the goal or destination of our discipleship, then All Saints’ Day is the day we remember and give thanks for folks like us who have lived faithful lives and have, by God’s grace, reached the goal.  And that’s a big deal!  Wesley called it “a day I peculiarly love.”

Charles Wesley got the point when he taught the early Methodists to sing:

Come, let us join our friends above
who have obtained the prize,
and on the eagle wings of love
to joys celestial rise.

Let saints on earth unite to sing
with those to glory gone,
for all the servants of our King
in earth and heaven are one.

One family we dwell in him,
one church above, beneath,
though now divided by the stream,
the narrow stream of death…

E’en now by faith we join our hands
with those that went before,
and greet the blood-besprinkled bands
on the eternal shore.

If the Monk and the Methodist got it right, then we have reason to celebrate those who have gone before us and who continue to be present with us in “the communion of the saints.”  I recognize some of their faces; I’ll be you can, too!  It’s also reason enough to keep on keeping on along the journey toward perfection in love in the hope that we will join them one day.

4 thoughts on “Halloween with A Monk and A Methodist”