Christmas is a season for singing, even when the air waves are saturated with the hard, angry sounds of impeachment and political polarization. From the shallow triviality of Frosty the Snowman to the grandeur of Handel’s Messiah, there’s music all around if we listen for it.

Yousuf Karsh ,the master photographer who took the portrait of just about every important person in the 20th Century, tells the story of his portrait of cellist and conductor, Pablo Casals in 1954 in the Abbey de Cuxa in Prades. While he was setting up his equipment, Casals was practicing. Karsh said: 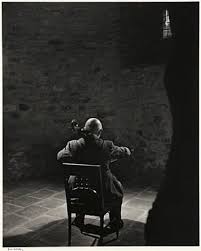 “I was so moved on listening to him play Bach that I could not, for some moments, attend to photography.” When the portrait was on exhibit at the Museum of Fine Arts in Boston, an elderly gentleman stood in front of it for many minutes every day. When the curator asked, “Sir, why do you stand day after day in front of this portrait?”, the old man replied with obvious irritation, “Hush, young man, hush – can’t you see, I am listening to the music!”

Don’t miss this. Karsh heard Casals play Bach.  He caught the moment in a picture, and an old man looking at the portrait could hear Bach’s music.

In the same way, Luke painted a word-picture of the “multitude of the heavenly host” singing when Jesus was born. (Luke 2:13-14)  Reading Luke’s story, we are invited to hear  the angels singing, “Glory to God in the highest, and on earth peace, goodwill to all.” In the cacophony of our boisterous time, the challenge during Advent is to listen for the music.

Regardless of the breaking news headlines and the verbal warfare in social media, there’s music is in the air. The question is whether we — like that old man in the Boston museum — will focus our attention long enough and deeply enough to hear it.  Which brings me to a disturbing word from Shakespeare.

The man that hath no music in himself,
Nor is not moved with concord of sweet sounds,
Is fit for treasons, stratagems, and spoils.
The motions of his spirit are dull as night,
And his affections dark as Erebus.
Let no such man be trusted. Mark the music.
–Merchant of Venice Act 5, Scene 1
(Erebus: “the primordial god of darkness…born out of the primeval void, Chaos…the personification of the deep darkness and shadows.”)

Tragically, it is possible to miss the music, even at Christmas.

We can become so narcissistically self-oriented, so deeply and darkly turned in on ourselves, that we become blinded to the glory of the Lord that shines around us. A person who has “no music in himself” and is “not moved by sweet sounds” becomes capable of “treasons, stratagems, and spoils.” Because they have no joy in themselves, they cannot hear or share the “good news of great joy” that Christ brings for all people.  As a result, their attitudes and actions become “dark as Erebus.” In the end, they are not people who can be trusted.

So, here’s my only comment on the impeachment. The saddest thing I can say about Donald Trump is that he seems to fit Shakespeare’s description; there seems to be little or no music in his soul. He appears to be a person who is almost devoid of joy.  Instead, he seems to be relentlessly driven by selfish greed, resentment, anger, and grievance. As a result, he drags us into the darkness rather than lifting us toward the light.

In Songs of America: Patriotism, Protest, and the Music That Made A Nation

Jon Meacham writes that a song may be “a small thing, but in a dissonant world, every moment of harmony counts–and if we share music, we might just shout in anger a little less and sing in unity a bit more.  Or so we can hope.” My deepest prayer for the President and for every one of us is that in the darkness of these days, we, like the shepherds, will catch a glimpse of the glory that shines around us and will once again be able to hear the angels’ song.  Mark the music.

9 thoughts on “Mark the Music”