Like most coal miner’s daughters, my Mom was made of strong stuff. I guess she had to be.

Born in 1921, she and her five siblings grew up on a small farm in the hills of Western Pennsylvania in a frame house without indoor plumbing. (I remember when they put it in.) They really did walk a mile through the snow to the little one-room schoolhouse through sixth grade. After that, they road the “jitney” on the railroad tracks to get into Brookville for high school.

They walked a mile in the other direction to the little, white frame, one-room church where Mom first learned what it means to follow Christ.

Mom says they didn’t know they were poor, because everyone around them was just like they were. My grandfather worked in the coal mines and my grandmother canned vegetables from the garden to see them through the winter. My brother now weaves rugs on the century-old loom that they used. He does it as a hobby, but they did it to keep food on the table during the Depression.

Mom was always grateful for Mr. and Mrs. Davis who took her as a live-in housekeeper so she get through college and become a school teacher.

A Woman of “The Greatest Generation”

Like so many women of her generation, she married Dad just before he and his brothers went off to war. Three of them came back. Jim, who by all accounts was the joy-bringer in a family infected by Germanic seriousness and burdened with hard work, was in a B-17 that was shot down over Holland. My brother visited there and saw where the farmers buried him until the war was over and they brought him home. My parents promised to name their first-born son (who happened to be me) in memory of him.

In ’47 she gave birth to the set of twins my Dad had predicted before he came home from the war. She still introduces me as “one of my twins.” Another brother arrived eight years later. All three of us would agree that being our Mom was just about the most important thing in her life.

If truth be told, there were times when her love smothered and over-protected us. But now that I’m a parent and grandparent, I am in awe of the way she loved us enough to let us go. I came to Florida, my twin brother went to Michigan, and our younger brother to California – all of which are about as far away from Western Pennsylvania as you can get. It had to be painful for her, but she wanted us to find the life we were called to live.

Her life wasn’t always easy. There was the fire that destroyed my father’s business, going back to teaching to put us through college, the cardiac surgery from which my Dad recovered and the cancer from which he didn’t. She was only 59 when he died, an age that seems younger to me every year. But the strength that was her birthright and the God in whom she trusted saw her through. She was determined to live on, and she did. Before she turned 90, she faced the death of two more husbands.

We celebrated her 95th birthday last week. She’s not as strong as she used to be. The legs that carried her to that one-room schoolhouse are immobile. The fingers that played hymns on the piano are gnarled. The voice that sang in church choirs is softer. Big chunks of her memory have faded away. 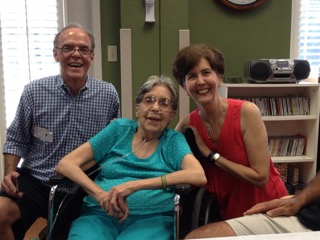 Strength in What Remains

What remains is the smile on her face, the strength of her love and the depth of her faith. We’ve never doubted her love for us, for our wives, our children and grandchildren. We’ve never questioned her faith in Christ. Her life of prayer continues to be her source of strength and a model for all of us. She loved us enough to let us go, and when the time comes, we pray that we will love her enough to let her go as well.

I’m grateful that years ago she made the plans for her death. She requested that at her memorial service we sing “Abide with Me” with that beautiful last verse:

Hold thou the cross before my closing eyes;
Shine through the gloom and point me to the skies.
Heaven’s morning breaks, and earth’s vain shadows flee;
In life, in death, O Lord, abide with me.

As Mother’s Day approaches, I give thanks for this strong woman, for the indomitable strength of her love and for her unwavering faith in Christ. She has abided in Christ and Christ’s love abides in her (John 15:4-5).  That’s about as good as it gets.

24 thoughts on “Mom Is a Coal Miner’s Daughter”