The Devil and Dr. Graham…and Us

This isn’t about Billy Graham, whose consistency of character and integrity of life are worthy of the honor he is receiving. It’s about Franklin, who inherited his father’s organization without learning the lessons his father learned along the way.

But it’s not only about Franklin. It’s about Franklin as the representative of the “evangelical” movement in America.  That’s the branch of the Christian family tree on which I grew up, began following Christ and found my calling.  Recently, however, “evangelical” has become the label for a political movement that is unfailingly loyal to a President whose personal behavior and political leadership are a consistent contradiction of many of the things my evangelical forebears taught me.

But it’s not about politics.  It’s about rescuing the Christian faith from the biblically shallow and theologically bankrupt version of it that is being promoted by Franklin and some other evangelical leaders today.  The gospel deserves better than this because it is better than this.

In the end, it’s about all of us who are called during Lent to follow Jesus into the wilderness where we come face-to-face with the devil and wrestle with the power of temptation. (Matthew 4:1-11)

In Easter Earthquake I described the wilderness as:

“…the soul-searching place where we face the temptation to settle for things that are less than God’s best, to take a shortcut to get to Easter without going through Lent, to experience new life without going to the cross.”

The temptations are all about power.  Jesus is tempted to use God’s power to satisfy his own human desires, to attract attention to himself, and to take control of “all the kingdoms of this world.”  The temptations are also about means and ends. Will Jesus use the devil’s means to attempt to accomplish a divine end?

Jesus won that wrestling match in the wilderness.  Unfortunately, my observation is that Franklin and his followers have taken the devil’s bait and have fallen into his age-old trap.

This came into focus for me in a New York Times editorial  by David Brody, a Christian Broadcasting Network commentator and author of  The Faith of Donald J. Trump. Brody acknowledged the President’s moral failures, but offered a measure of grace that conservative Christians never offered to prior Presidents.  He wrote, “They afford him grace when he doesn’t deserve it…But evangelicals truly do believe that all people are flawed, and yet Christ offers them grace. Shouldn’t they do the same for the president?”

Nothing essentially wrong with that word of grace.  We all stand in need of the forgiveness and grace we don’t deserve.

But Brody heads off into the wilderness when he explains why these evangelicals offer such expansive grace to this uniquely flawed leader.

It’s because “they’re looking for a bold culture warrior to fight for them.”  He asks, “Why in the world wouldn’t evangelicals get behind and support a man who not only is in line with most of their agenda but also has delivered time and time again?”

And here’s Brody’s definition of the evangelical agenda:

“The goal of evangelicals has always been winning the larger battle over control of the culture, not to get mired in the moral failings of each and every candidate.”

I reject Brody’s use of the word “always” because “control of the culture” was not the agenda of the evangelicals who nurtured my faith nor of Billy Graham, whose evangelistic crusades were focused (some would say too narrowly focused) on personal faith in Christ. 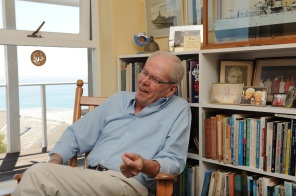 who led the Methodists in South Africa during the struggle against Apartheid, reflected on this question in remembering his personal encounter with Billy Graham. “His mandate, he claimed, was to preach the ‘plain and simple Gospel.’ The problem is there is no such thing. What he really meant was that he would offer only half the Gospel, the half that invited people to face their personal sins without confronting the systems that often did their sinning for them.”

In contrast to Billy Graham, Brody said the goal is control of the cultural, i.e. political power focused on a narrow set of social issues. To achieve that goal, the end justifies any means, including accepting or denying the moral failures of their “cultural warrior.”

Hard Questions in the Wilderness

All of which raises some disturbing questions about this version Christianity; questions with which every faithful disciple is called to wrestle in the wilderness.

These are not easy questions with simplistic answers.  They can’t be answered with a political slogan or a Tweet.  The wilderness is never a comfortable place; neither is the cross.  But the wilderness is where we decide who we are and what God is calling us to be or do.  The cross is where we see the means by which God intends to answer the prayer that God’s kingdom will come and God’s will be done on earth as it is in heaven.

Wrestling in the wilderness,

11 thoughts on “The Devil and Dr. Graham”