A Con Artist of Biblical Proportion

Jacob was, among other things, a crook…Jacob was never satisfied. He wanted the moon, and if he’d ever managed to bilk heaven out of that, he would have been back the next morning for the stars to go with it.

It was a turning point in scripture when Esau, Jacob’s first-born, fraternal twin brother, came in from working in the field and found Jacob mixing up a batch of beef stew. Esau was starving and asked Jacob to serve up a dish of it.  Jacob said, “Let’s make a deal.  I’ll trade you some stew for your birthright.” Without giving it much thought, Esau said, “I’m starving! What good is a birthright if I’m dead?” Esau enjoyed the stew but later regretted what he traded for it.  (Genesis 25:29-31)

Some older translations referred to Jacob’s stew as “a mess of pottage” which became a metaphor for “something immediately attractive but of little value taken foolishly and carelessly in exchange for something more distant and perhaps less tangible but immensely more valuable.”

A Mess of White House Pottage

I remembered the bargain between Jacob and Esau when I read the reports of the  “evangelical” leaders who went to dinner at the White House a few weeks ago.  That’s big deal.  I remember how important you feel when you walk into the Oval Office and get a picture taken with the President. 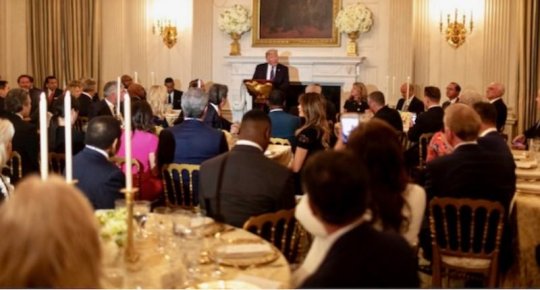 It’s no small thing to be invited to dinner with the President, Vice-President and First Lady.

Sadly, as Esau learned, it doesn’t come cheap.  In his remarks, the President was perfectly clear that they were there for what they are doing for him.  There isn’t space in the East Room for any Nathan-like prophet who would hold the President accountable for his behavior. (2 Samuel 12:1-17)

I grew up on the evangelical branch of the Methodist family tree.  I was diapered on church pews where evangelical preachers proclaimed an evangelical gospel and challenged me to live an evangelically-defined Christian life.  Along with teaching me to sing hymns, pray and listen for the Spirit, they taught me the meaning of honesty, sexual morality, respect, and compassion for others. My evangelical forbearers placed a high value on American democracy and opposed anything that looked like authoritarian or dictatorial rule.

It’s because of my evangelical birthright that I made my earliest commitments to follow Christ, started tithing my income, heard God’s call to ministry, and have been faithful to the way the United Methodist Book of Discipline defines sexual morality as “celibacy in singleness and fidelity in marriage.”

I still consider myself to be “evangelical” in the original sense of the word.  But as hungry for political power as Esau was for supper, today’s “evangelicals” have made a strange bargain with their birthright.

There is a sad history of this kind of bargain. Whenever the church has gotten too close to political power, it has always ended up being the loser.  Don’t forget the way the church in Germany sold its birthright to Hitler.

By contrast, here’s the way Martin Luther King, Jr., described the church’s relationship with political power in his book, The Strength to Love. We need to be reminded of his message, regardless of which party holds the keys to the White House.

The church must be reminded that it is not the master or the servant of the state, but rather the conscience of the state. It must be the guide and the critic of the state, and never its tool. If the church does not recapture its prophetic zeal, it will become an irrelevant social club without moral or spiritual authority…But if the church will free itself from the shackles of a deadening status quo, and, recovering its great historic mission, will speak and act fearlessly and insistently in terms of justice and peace, it will enkindle the imagination of [humankind] and fire the souls of [people], imbuing them with a glowing and ardent love for truth, justice, and peace. (Strength to Love, 1963)

I hope my “evangelical” brothers and sisters enjoyed dinner at the White House as much as Esau enjoyed Jacob’s stew, because like Esau, all of us who represent the Christian faith will pay a high price for it.

6 thoughts on “A Birthright for a Mess of Politics”