A Table with a Window on the World

Among the irreplaceable things that were lost on 9/11, one was the spectacular view from the Windows on the World restaurant 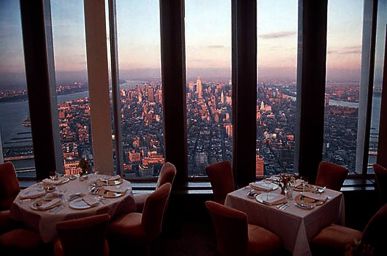 on the 106-107th floors of the North Tower of the World Trade Center.   On a clear day, a table beside the floor-to-ceiling windows felt like a table with a window on the world.

Looking back on where we’ve come in the past 17 years, we’ve lost more than just a restaurant with a spectacular view.  We’ve also lost that kind of expansive view of the world.  Our “America First” mentality has cramped our vision and squeezed our interest down to the things that are right here, close at hand, rather than keeping our eyes focused on the larger world around us.

By contrast, World Communion Sunday was the reminder that the table of our Lord is a table with a window on the whole, wide, wonderful, wounded world.

The prophet Isaiah looked through God’s window on the world when he promised a day when the Lord would host a spectacular banquet. (Isaiah 25:6-10)  Don’t miss the little word “all.”

…the Lord will prepare for all peoples a feast of rich food and well-aged wines.  Forget your Weight Watchers diet for this one!

…the Lord will destroy the shroud that is cast of all peoples, the shroud is spared over all nations.  He will swallow up death forever.

…The Lord will wipe the tears from all faces.

John caught the same vision in the closing pages of the New Testament:

After this I looked, and there was a great crowd that no one could number. They were from every nation, tribe, people, and language. They were standing before the throne and before the Lamb. (Revelation 7:9)

According to the bible, God’s intention for this world is that all kinds of people, from all places, all cultures, all races, be drawn together in the love revealed in the broken body and poured out blood of Jesus Christ.

The biblical vision of Heaven is a lot more like the United Nations than the DAR or the VFW.  If you don’t like being among people of other races, colors, languages, nations and cultures, you might not want to go there.  In fact, I’m convinced that Hell is total isolation in which our lives shrink down to the smallest corner of our own self-interest.

We who gather around Jesus’ table are called to live now in ways that bear witness to God’s ultimate vision for the whole creation.  The traditional communion liturgy concludes with the prayer:

By your Spirit make us one with Christ,
one with each other,
and one in ministry to all the world,
until Christ comes in final victory
and we feast at his heavenly banquet.

1 thought on “A Window on the World”