Can United Methodists find a way through the painfully difficult impasse surrounding a biblical understanding of human sexuality in general and same-sex relationships in specific?  Can we find, in the words of the General Conference mandate for the Commission on A Way Forward:

…a way for being church that maximizes the presence of a United Methodist witness in as many places in the world as possible, that allows for as much contextual differentiation as possible, and that balances an approach to different theological understandings of human sexuality with a desire for as much unity as possible. This unity will not be grounded in our conceptions of human sexuality, but in our affirmation of the Triune God who calls us to be a grace-filled and holy people in the Wesleyan tradition.

The biblical model for this kind of decision is in Acts 15.  After long debate about whether to continue to require Gentiles to be circumcised the way God commanded in the Old Testament, James, the brother of Jesus, offered the final word that led to a way forward for the early Church.

Where is James When We Need Him?

In the traditional calendar of saints, today is the day we remember James, the brother of Jesus, often identified as James the Just. 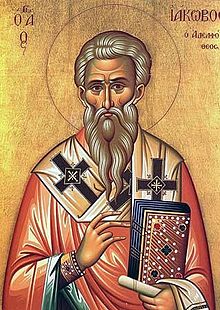 The collect prays that “following the example of your servant James the Just, brother of our Lord, your Church may give itself continually to prayer and to the reconciliation fo all who are at variance and enmity.”

This is also the day when our Judicial Council meets to determine whether the “One Church Plan” which received majority support in both the Commission on a Way Forward and the Council of Bishops passes muster to come before the General Conference.

(I plead for patience from readers of this blog who aren’t familiar with the complexity of the methods we United Methodists use!)

It’s a good day to pray that the spirit of James will be at work among “the people called Methodist” as we listen for the way the Holy Spirit might surprise us with a way of living together that will be a witness for the reconciling love of God in our deeply divided, painfully polarized world.

My Word to the Delegates

A Statement to the Florida Delegation
James A. Harnish
October 23, 2018

During four years of required chapels at Asbury College, I vowed that I would never be like the alumni who came back to preach and opened their sermons by saying, “When I sat where you now sit…”

But here goes with another broken vow.  When I sat where you sit as delegates, I was keenly aware of the bizarre combination of prayer and politics that drives General Conference decisions, but I never imagined that my vote might actually tear the denomination apart.

I’m here with a prayer that the Holy Spirit will surprise us – the way the Spirit so often surprised the church in the book of Acts – by leading us through the politics without tearing us apart.

I speak on behalf of nearly 5,000 clergy and laity who have joined the Uniting Methodists movement.  This movement was born out of a desire to be faithful to Paul’s words to the Ephesians:  “Accept each other with love, and make an effort to preserve the unity of the Spirit with the peace that ties you together.” (Ephesians 4:2-3)

Uniting Methodists affirm the way of being together that Paul described in Romans 14 when Christians were divided over biblical convictions about food, which were just as divisive then as the issues that divide us today.  Paul told them to “strive for the things that bring peace and the things that build each other up.”  (Romans 14:19)

We believe that our Wesleyan theology of love and grace, our spiritual tradition, and our connectional mission of making disciples of Jesus Christ who participate in God’s transformation of the world are strong enough to hold us together in a way that affirms our unity while honoring the diverse contexts in which we serve.

We believe that the life-transforming global ministries we accomplish through our connection – things like UMCOR, Africa University, Disciple Bible Study and the Walk to Emmaus – are worth the effort it will take to stay together.

And we believe that the One Church Plan is the best option for a way forward.  It emerged from a process of spiritual discernment that resulted in majority support in both the Commission on a Way Forward and the Council of Bishops.  It’s an imperfect, but practical way to acknowledge our differences while affirming our unity in Christ.  If, by the power of the Holy Spirit, we can pull this off, it will be a transformative witness for Christ in our deeply divided world.

President Obama often challenged us not to allow the perfect to keep us from the possible.  The Uniting Methodists movement encourages you to support the One Church Plan as the best possible way for us to make disciples of Jesus Christ for the transformation of the world.  Thank you.

7 thoughts on “Where In the World Is James, the Just?”