If anyone suggests that the gospel is an other-worldly, pie-in-the-sky story that is out of touch with the hard realities of the “real world” in which we live, I suggest they read Matthew 2:13-18.  It’s the brutal story of the lengths to which an insecure tyrant can go to  to protect his own power. 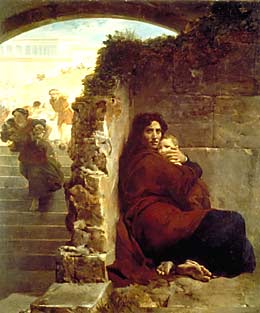 If anyone suggests that the Church lives in an esoteric world of spiritual mysticism that doesn’t confront the evil, suffering and injustice around us, I dare them to look at the liturgical calendar for December 28.  Before we’ve had time to put away the decorations or finish the left-over turkey, the liturgical calendar commemorates The Holy Innocents.

I had, in fact, forgotten that The Coventry Carol is actually the song of a frightened Mary protecting her son from:

Herod the king, in his raging,
Chargèd he hath this day
His men of might in his own sight
All young children to slay.

A Prayer for the “Innocents”

The collect for today names the reality of evil and suffering and invites us to pray courageously:

We remember today, O God, the slaughter of the holy innocents of Bethlehem by King Herod. Receive, we pray, into the arms of your mercy all innocent victims; and by your great might frustrate the designs of evil tyrants and establish your rule of justice, love, and peace; through Jesus Christ our Lord, who lives and reigns with you, in the unity of the Holy Spirit, one God, for ever and ever. Amen.

Who Are the “Innocents” Today?

As I read the scripture and prayed those words, I found myself asking, Who are the “holy innocents” today?  Who are the children who suffer and die because of evil tyrants or because of injustice in our political and economic systems?  I remembered:

The list could go on and on.  And as I prayed for God to “frustrate the designs of evil tyrants and establish your rule of justice, love, and peace,” I found myself asking the even more difficult questions:

It’s not a Christmas story we like to tell or questions we like to ask, but neither the gospel or the liturgical calendar will allow us to escape them.

David Miller, the pastor at First United Methodist Church in Winter Park, Florida, ends each of his sermons with the question, “What about you?”