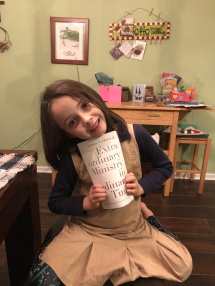 There’s nothing like the innocent honesty of a four-year-old to leave us adults speechless.

Our daughter in South Carolina called on FaceTime because our granddaughter had a question for me.  She turned the camera to Molly who was holding a copy of my new book, Extraordinary Ministry in Ordinary Time.(Forgive a slightly gratuitous bit of “product placement”!)

Molly asked innocently, “Gampa, why aren’t there any pictures in this book?” As she flipped through the pages she pointed out the disappointing but all too obvious truth, “It’s only words.”

Molly was correct that it is “only words.”  But sometimes a few words can make a seismic difference.

You know the story.  On Thursday, November 19, 1863, people gathered at Gettysburg on ground that was still soft and soggy where bodies had been quickly buried in shallow graves. (Read Garry Wills’ Pulitzer Prize winner, Lincoln at Gettysburg: The Words that Remade America.)

Edward Everett, the renowned pastor, politician and nationally-recognized orator, delivered a two-hour, seldom-read, 13,607-word oration. Afterward, the President was on the program to offer “a few appropriate remarks” for the dedication.

Lincoln was wrong when he said, “the world will little note, nor long remember what we say here.”  In just 271 words that he had written down on the bumpy train ride from Washington, Lincoln spoke words that are inscribed on the wall of the Lincoln Memorial and imprinted on the soul of the nation. They’ve never been matched or outdated. Even if you think you know the Gettysburg Address, I urge you to read Lincoln’s “few appropriate remarks” again.

Four score and seven years ago our fathers brought forth on this continent, a new nation, conceived in Liberty, and dedicated to the proposition that all men are created equal.

Now we are engaged in a great civil war, testing whether that nation, or any nation so conceived and so dedicated, can long endure. We are met on a great battle-field of that war. We have come to dedicate a portion of that field, as a final resting place for those who here gave their lives that that nation might live. It is altogether fitting and proper that we should do this.

But, in a larger sense, we can not dedicate — we can not consecrate — we can not hallow — this ground. The brave men, living and dead, who struggled here, have consecrated it, far above our poor power to add or detract. The world will little note, nor long remember what we say here, but it can never forget what they did here. It is for us the living, rather, to be dedicated here to the unfinished work which they who fought here have thus far so nobly advanced. It is rather for us to be here dedicated to the great task remaining before us — that from these honored dead we take increased devotion to that cause for which they gave the last full measure of devotion — that we here highly resolve that these dead shall not have died in vain — that this nation, under God, shall have a new birth of freedom — and that government of the people, by the people, for the people, shall not perish from the earth.

They were only words. But those few words never cease to call us to “the unfinished work…the great task remaining before us.”

We are still “testing whether that nation, or any nation so conceived and so dedicated, can long endure.” The issues that divided the nation then continue to divide us today with the rise of  white nationalism and white supremacy groups. By contrast to Lincoln’s soaring words of inspiration, we can hope that “the world will little note, nor long remember” the vulgar, mean-spirited, and dishonest words of the current President.

They are only words, but we can pray that, as Lincoln promised,“the mystic chords of memory will swell when again touched, as surely they will be, by the better angels of our nature.”

Thanks, Molly, for pointing out the obvious limitations of my attempts at writing. If I ever publish a book with pictures, you’ll be in it!

7 thoughts on “It’s Only Words”