The Common Objects of Our American Love

Jon Meacham brought his insight as one of our leading historians, to a brilliant (and brief!) commencement address to the 2017 graduates of Middlebury College.  The author of The Soul of America referred to St. Augustine who defined a nation as “a multitude of rational beings united by the common objects of our love.” 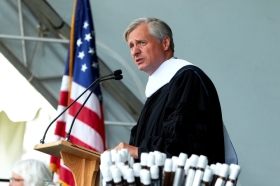 Meacham repeated that phrase, the common objects of our love and asked the question for our nation, “What do we love in common?”  Then he said, “The painful but unavoidable answer is: not enough.”  He went on to affirm the way the story of our nation’s history has the power to bring us together.  “We have always grown in strength the wider we have opened our arms–and the more we have opened our hearts…From Lexington and Concord to Lewis and Clark…from Seneca Falls to Selma, we have sought to perfect our Union.”

It’s an understatement to say that we live in a moment when our nation is terribly torn by the conflicting crosscurrents of polarized politics which are the outward sign of a deeper rending of the the fabric of our life together by tribal instincts that are often rooted in fear or resentment rather than reason or truth.

Perhaps we can find our way through the morass of our times by being reminded of “the objects of our love.”  Without blind denial of the importance of the issues that divide us, can we at the same time reclaim the things that could unite us?  The big ideas of human dignity and worth (all people are created equal), liberty (the Bill of Rights and the 13th, 14th, 15th and 19th ammendments), and the compelling and uncompleted vision of “liberty and justice for all.”

“The founders expected seasons of anger and frustration; they anticipated hours of unhappiness and unrest.  The country was thus constructed with an awareness of sin and a determination to protect the larger republican enterprise from the furies of the moment.”

The Common Object of our United Methodist Love

One problem was that, like General  Conferences before and since, the delegates depended on the rules of parliamentary procedure.  One Methodist historian wrote:

There was among the Methodists none of the Quaker sense of consensus, of aiming at or moving toward agreement.  Rather the whole principle of action was to create division, to draw sharp lines, ask that men [there were no women delegates] declare themselves for or against…At the most trying hour of their history the Methodist preachers [there were no lay delegates) in conference assembled used the tactics of conflict and the methods of the state.  (Organizing to Beat the Devil, p. 221-222)

Stephen Olin, delegate from the North, said, “If we push our principles so far to break up the connection, this may be the last time we meet.  I fear it!  I see no way of escape.”  (p. 223)  There was no escape.  The church divided and remained that way until 1939.

Some say that we are at that place again; that there is no way for the United Methodist Church to remain united because of our differences of biblical interpretation and conviction regarding human sexuality.  But is division inescapable?

Perhaps we could find our way through this difficult time by being reminded of the common objects of our love.

Some of us continue to believe that the things that we love are strong enough to overcome the things that divide us — our Wesleyan theology, our compelling mission, our spiritual tradition and the strength of our shared ministry around the world.  That’s the vision and hope of the Uniting Methodists movement.  We dare to believe that in the love of Jesus Christ there is “Room for All.”  (I invite you to go to the web site and join us in this witness.)

Might what Meacham said of the nation, in a much deeper sense, be true of the church?

The point of America is not for all of us to think alike; that’s impossible and undesirable…Autocracies are about total agreement, or at least total submission;  the American republic is founded on the notion that even the person with whom I most stridently disagree might have something to say worth hearing and heeding…The shame only comes when we take refuge in unjustified certitude rather than fearless openness of mind and soul.”

I would edit his final words to read, “fearless openness of mind, heart and soul in the love of God in Christ.”

It’s worth praying, hoping and working for both our nation and our church to be “united in the common objects of our love.”

2 thoughts on “United in The Things We Love”