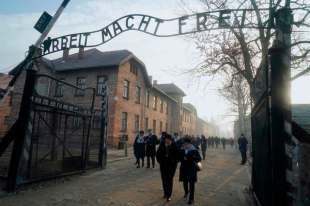 Yesterday’s commemoration of the 75th anniversary of the liberation of Auschwitz drew several hundred survivors, most of whom where children at the time, back to the place that marks the almost inexpressible evil that human beings are capable of inflicting on other human beings.

It also pointed to a disturbing poll revealing that nearly half of all Americans — 41 percent — couldn’t identify Auschwitz. Among millennials, that number rose to an even more unsettling 66 percent.

It took me back to 1981 when I had the privilege of being engaged with the leadership of the Orlando Holocaust Conference, a major event that drew together educators, religious leaders, politicians and others to hear the stories and wrestle with the implications of the Holocaust. The Conference led to the establishment in 1986 of the Holocaust Memorial Resource & Education Center of Florida  in Maitland.

The driving force behind both the Conference and the Center was a survivor named Tess Wise. Tess was nothing short of a “force of nature” in her passion to remember the stories and to fulfill the promise, “Never Again.”  You can hear her speak on the 25th anniversary of the founding of the Center here.

The Church and the Holocaust

One of the speakers at the Conference was Dr. Franklin Littell , the Methodist historian and theologian who is remembered as the “father of Holocaust studies” from a Christian perspective. He described how his engagement in the subject began when he, as a young, Methodist missionary, witnessed a Nazi rally in Nuremberg in 1939.  I can still hear the pain in his voice when he told the story of a Bishop who told him, “Hitler is God’s man for Germany!”

While being both inspired and challenged by the witness of Dietrich Bonhoeffer, it is sobering to remember that the Confessing Church was a courageous, minority movement that stood against Hitler’s anti-Semitism while the rest of the institutional church (both Protestant and Catholic) went along with it, even providing the theological foundation for anti-Semitism.

In the days leading to the commemoration, Piotr Cywinski, the director of the Auschwitz-Birkenau State Museum, expressed concern about how we apply the lessons of history to our own time.  “More and more we seem to be having trouble connecting our historical knowledge with our moral choices today,” he said. “I can imagine a society that understands history very well but does not draw any conclusion from this knowledge.”

In the same article, Zofia Posmysz, a 96-year-old Polish survivor of Auschwitz, said, “I fear that over time, it will become easier to distort history,” she said in her apartment in Warsaw. “I cannot say it will never happen again, because when you look at some leaders of today, those dangerous ambitions, pride and sense of being better than others are still at play. Who knows where they can lead.”

May God help us to remember the horror and to be strengthened to work for the fulfillment of the promise, “Never Again!”